Petra and the Kingdom of Jordan
ITINERARY

Why go to Jordan?   Many Biblical events took place on the East side of the Jordan River in what is now the Hashemite Kingdom of Jordan.  The tribal homelands for three of Israel's 12 Tribes were East of the Jordan. (Remember, modern political boundaries in the Middle East are really just lines drawn on a map after World War I.)  Jesus spent considerable time on the other side of the Jordan and there is much to see.   Jordan is a fascinating place to visit – safe in every way and very hospitable to pilgrims.  I have taken groups to Jordan several times now and also spent time there while I was on sabbatical in 2017.  Jordan is also the land of the ancient Edomites, Moabites, Ammonites, and later the Nabateans.  It was the allotted land for the Jewish tribes of Ruben, Gad and the half-tribe of Manasseh.  In the Byzantine Period the landscape of Jordan was dotted with Churches as the people of this land were nearly all Christians. If you can find the extra time and money – you will be glad you went with us to  on this Jordan Extension.

Big Picture & Timeline:
The Jordan Prequel precedes our 2022 Living Stones Pilgrimage to Israel & Palestine.  Instead of flying to Tel Aviv on May 30, 2022, we will fly to Amman, Jordan  on Monday May 16.  We arrive at Queen Alia International (AMM) the next day.  We then tour Jordan for 4 full days.  On May 21 we will travel by motor-coach to Israel, crossing the international border into Israel at the famous Allenby Bridge.  We will drive up the Jordan River Valley to the fascinating ancient site of Beit She’an, where will also explore the extensive Roman ruins on-site.  Supper time will find us at our hotel in Galilee where we will join up with the rest of our entourage for the tour of Israel and Palestine.

While most people think of the Holy Land as Israel and Palestine, properly speaking the Holy Land includes portions of the modern nations of Israel, Palestine, Lebanon, Syria, Jordan, and Egypt. Ancient borders & territories did not follow today’s political boundaries that have moved many times. 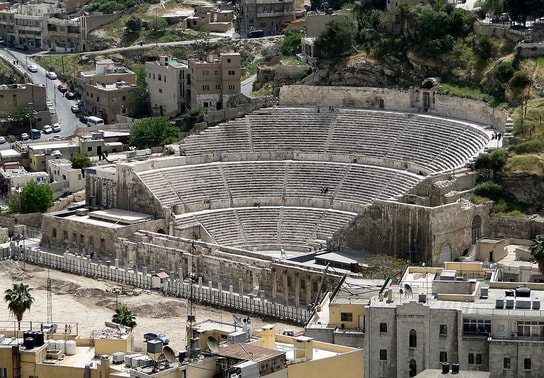 ​We will land Queen Alia International Airport, Amman mid-afternoon – likely at 3:00 PM.  After collecting our luggage and clearing customs we will be met by our guide who will take us to our motor-coach.  The drive in to Amman takes a little less than 45 minutes. (Our motor-coach will be Air Conditioned and Wi-Fi equipped. (Wi-Fi is notoriously unreliable on tourbuses.) Roaming in Jordan can be expensive – so I suggest you turn roaming off and go ‘unplugged’ for a few days. A brief drive about Amman will help to orient us to this ancient city though we will make no stops.  Afternoon check-in to our hotel for dinner and overnight at the Century Park Hotel, Amman. We will be tired for our long journey and dinner and overnight will be welcome. 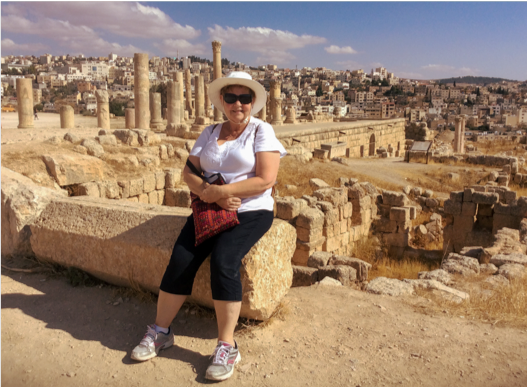 Our day begins with breakfast at our hotel with excellent middle-eastern food and western food to choose from.  We then check-out of our Hotel and gather on the bus. We spend a couple hours exploring some highlights of ancient Amman,our tour will include the Citadeland the Roman Theatre[1].  Amman was called Rabbath Ammon or Rabat Amon by the Ammonites. It was later conquered by the Assyrians, followed by the Persians, the Greek Macedonians,[2]and the Romans..

We then drive to the ancient city of Jerash, site of the ruins of the Greco-Roman city of Gerasa, also referred to as Antioch on the Golden River. After the Roman conquest of AD63, Jerash was included in the Roman province of Syria, and later became part of the Decapolis leagueof cities.   After AD106 Jerash was part of the Roman province of Arabia of which Philadelphia (Amman) was the capital.  Remains in the Greco-Roman Jerash include (numerous Corinthian columns,  Hadrian's Arch,[3]The circus-hippodrome,The two large temples (dedicated to Zeus and Artemis), a nearly unique oval Forum, a long colonnaded street or cardo, Two theatres (the Large South Theatre and smaller North Theatre), / Two baths, and a scattering of small temples and an almost complete circuit of city walls.
Jerash flourished in the Byzantine period – evidenced by the many churches found within the walls.  From AD 350, a large Christian community lived in Jerash, and between AD 400–600, more than thirteen churches were built, many with superb mosaic floors. A cathedral was built in the 4th century. An ancient synagogue with detailed mosaics, including the story of Noah, was found beneath a church.   Jerash declined rapidly after the Persian invasion of AD614.
Outside of Italy, Jerash is considered one of the largest and best preserved sites of roman architecture in the world.   We will enjoy Lunch at the Jerash Lebanese Restaurant offering Arabic traditional Cuisine.

After lunch we drive south to the village of Wadi Musaadjascent to the site of Petra. There we check in at the Petra Guest House, for dinner and overnight.  (We will stay for two nights at this elegant hotel, perfectly located for exploring Petra.
​THUR., May 19     THE ROSE-RED CITY HALF AS OLD AS TIME